BBC News
Share on FacebookShare Share on TwitterTweet
The retailer says its £1 engagement rings are a hit, as it taps growing demand for Valentine's Day goods. 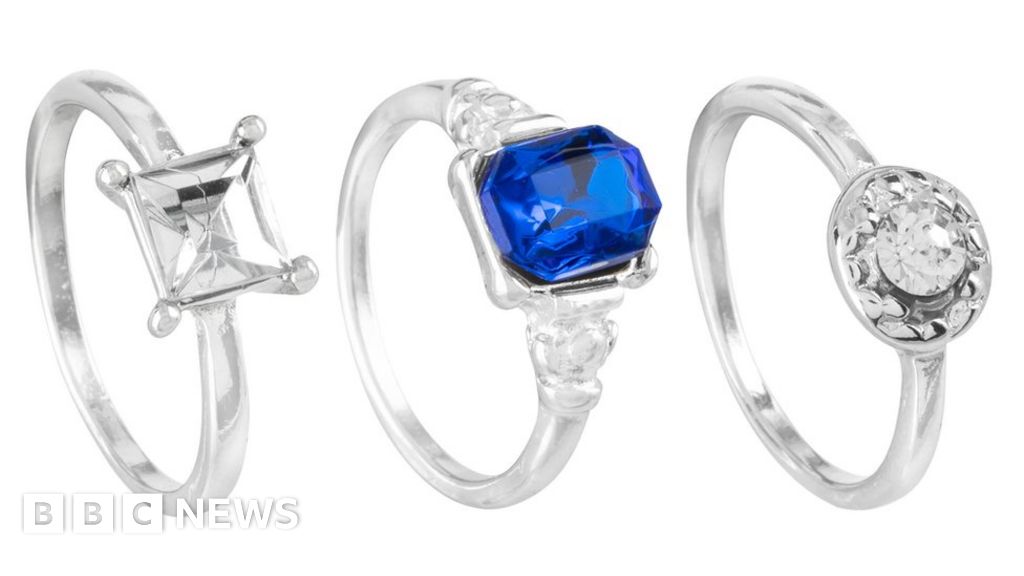 Some say it with flowers, others with chocolates - but it seems an increasing number of us are showing our affections with rings bought from Poundland.

The discount retailer told the BBC it had sold almost 40,000 engagement rings ahead of Valentine's Day this year, nearly double last year's tally.

The £1 "Bling Rings" and "Man Bands" are meant to be used as "placeholders" for proper rings, it said.

But one analyst described such promotions as "increasingly desperate".

Spending on Valentine's Day reached around £853m last year, up 7.8% on 2018 figures, according to the research firm Savvy. And unsurprisingly retailers are looking to cash in again this year.

Poundland says its Valentine's range is its biggest yet, featuring more than 80 products ranging from fragrances to "adults only" gift cards.

And M&S has brought back its heart-shaped "love sausages" and introduced a new "love cucumber", which can be cut into heart-shaped slices.

Retail analyst Kate Hardcastle said events like Valentine's Day are really important for retailers because they drive customers into shops where they will often make impulse purchases.

She said this year's event would also mark the end of a "long bleak winter" for retailers, many of whom have been struggling with a slowdown on the High Street.

Restaurants, florists and gift card companies are particularly set to benefit, as 14 February can be one of their busiest days of the year.

Interflora, the flower-ordering service, told the BBC it will deliver 15 times as many bunches of flowers than on a typical day. That is about three bouquets every second.

Then there's online table booking platform Quandoo, which has seen a 160% increase in bookings for Valentine's Day this year, compared to the average Friday. However, it also expects more cancellations than usual.

Analyst Richard Hyman said retailers had long catered to Valentine's Day, although it is nowhere near as important as events such as Black Friday.

He also feels firms are increasingly overplaying events like Valentine's Day with "desperate gimmicks" in the hope of attracting consumers' attention.

"I think as the retail recession takes hold, desperation grows. And the industry is going to be looking for events more and more that they can use as a tool to build a promotion around.

"The reality is that most retailers these days are on promotion most of the time. And giving a name to that promotion is quite handy.

Despite the reservations, retailers continue to find new ways of making money out of the day.

Card company Moonpig, for example, told the BBC it had seen an increase in the number of cards bought for favourite pets.

And its rival Card Factory said people were increasingly celebrating Valentine's Day with friends and family members, not just significant others.

Poundland meanwhile has been looking to capitalise on consumers growing reluctance to go out, as evidenced by the slowdown in pub and restaurant sales over the last few years.

It said it would will be selling romantic decorations this year to help couples capture the same mood at home. "Many Brits prefer cosy, romantic nights in to spending a fortune on dining in over-priced over crowded restaurants on Valentine's day," a spokeswoman said.