Sky Sports
Share on FacebookShare Share on TwitterTweet
Sebastian Vettel, Valtteri Bottas, Carlos Sainz and Lance Stroll have been given reprimands for not removing T-shirts carrying messaging related to the sport's We Race As One initiative for the Hungarian national anthem.
Drivers are free to display messages of support ahead of the race, but are asked to remove T-shirts for the national anthem; stewards say four drivers in question "forgot to take off the We Race As One t-shirt in time during the national anthem because of the onset of rain"
By James Galloway

Sebastian Vettel, Valtteri Bottas, Carlos Sainz and Lance Stroll have been given reprimands for not removing T-shirts carrying messaging related to the sport's We Race As One initiative for the Hungarian national anthem.

Vettel, who has shown his support for the LGBTQ+ community in Hungary at this weekend's event following controversial legislation imposed in the country recently, was wearing a 'same love' rainbow T-shirt ahead of the race, which he also wore during the anthem.

The other three drivers were still wearing their We Race As One (WRAO) T-shirts.

Under guidelines issued to teams by the FIA's race director, drivers are free to wear a "GPDA issued WRAO t-shirt or any attire conveying a message in support of the WeRaceAsOne values" before the race in the sport's ceremony when the drivers initially gather at the front of the grid.

The note also states: "The FIA, Formula 1, Teams and Drivers stand united as a sport in support of the principles of WeRaceAsOne, the initiative created by Formula 1 under the FIA's #PurposeDriven movement. Each driver may choose to mark this moment with their own gesture, while complying with the fundamental principles of the FIA Statutes."

The national anthem immediately follows that procedure and, under the guidelines, the FIA states that drivers must "remove their t-shirts and move to their name card position for the National Anthem, wearing their race suits".

After speaking to the four drivers summoned after Sunday's race, the stewards said for each of them in their rulings of the non-driving reprimands: "The driver explained that he forgot to take off the WRAO t-shirt in time during the national anthem because of the onset of rain." 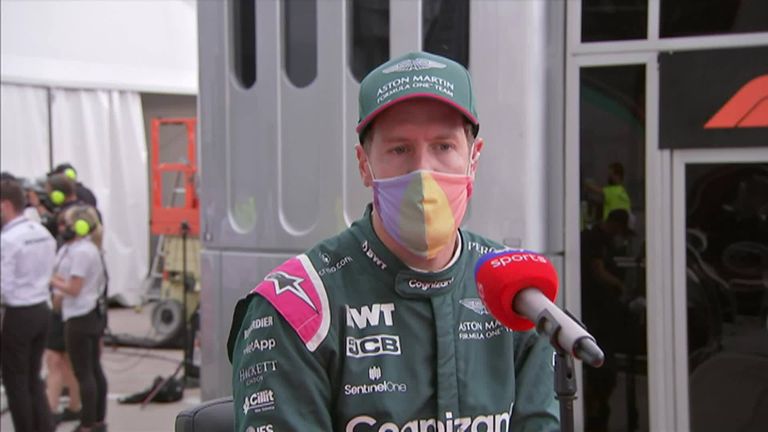 Vettel had earlier told Sky Sports F1: "I'm happy if they disqualify me. They can do whatever they want to me, I don't care."

On Thursday, Lewis Hamilton posted on social media his own support for LGBTQ+ people in Hungary and strongly criticised the country's government for the laws which ban the depiction of homosexuality to young people.

Speaking about Vettel's support for the issue, Hamilton said: "I think it's wonderful that Seb has taken a stance this weekend to really speak out for those in the LGBTQ+ community here. I spoke about it at the beginning of the weekend and I think it was important for him to do so.

"It probably won't be too much trouble but we have to make a stand, we're pushing diversity and inclusivity and that community is 100 per cent included in that. I'm proud of him."