Scotland's stand-in captain John McGinn says they needed Wednesday's 3-0 win over Ukraine - which moved them two points clear at the top of their Nations League group - after the heartbreak of missing out on the World Cup.

"We needed that," McGinn told Premier Sports. "The summer hurt us badly. Tonight we got back to doing what we do well, being horrible to play against and showing desire."

Pressure was building on Scotland after a raft of missed chances by Stuart Armstrong, Ryan Christie and Che Adams in an impressive showing from the hosts, but the floodgates opened after McGinn broke the deadlock to the relief of the Hampden Park crowd.

An injury to Everton right-back Nathan Patterson - which saw him stretchered off in the first half - was the only blot on an otherwise perfect evening for Scotland. "We don't know [how bad it is] because he has to go away and get assessed, but it doesn't look like a good one," said Scotland head coach Clarke.

Scotland have taken control of Group B1, with only two draws needed against Republic of Ireland and Ukraine to finish top. Promotion to the top tier of the Nation's League would give Scotland the guarantee of a Euro 2024 play-off should they miss out on qualification.

Man of the match: John McGinn.

How Scotland made amends against Ukraine

Scotland had the best of the chances in a scrappy first half, with Christie heading over after getting underneath Armstrong's cross before narrowly mistiming his follow-up run after the Southampton midfielder's shot was kept out by Ukraine goalkeeper Anatoliy Trubin.

Shakhtar Donetsk winger Mykhaylo Mudryk, who has been a transfer target for Arsenal and Brentford, was a constant thorn in the side of Everton right-back Nathan Patterson until he was stretched off but was largely kept quiet in the second half by Brentford's Aaron Hickey.

Adams led the line well for Scotland and thought he had broken through the Ukraine defence in the closing stages of the first half until he was body-checked by Valeriy Bondar. Scotland boss Steve Clarke was incensed on the touchline and felt it was deserving of a red card, but Oleksandr Karavaev was on the cover and Adams' last touch took the ball away from goal.

Scotland were spurred on by the perceived injustice of the decision after the break and Armstrong had two chances to break the deadlock, but was prevented by Trubin before firing over from close range with the goal seemingly at his mercy after a neat one-two with Manchester United midfielder Scott McTominay.

Adams had two big opportunities to score with his head at the back post but was kept by the crossbar and Ukraine goalkeeper Trubin, before floating a cross into Armstrong only for the midfielder to spurn his third chance in a matter of minutes with a poor mistimed header.

But Scotland eventually got the breakthrough when McGinn outmuscled Bondar just inside the box before turning and firing a low, drilled strike into the bottom corner. The arrivals of Ryan Fraser and Dykes paid immediate dividends, as the Newcastle wide-man set up the QPR striker for two headed goals from corners.

McGinn: We needed that - the summer hurt us badly

"We needed that. The summer hurt us badly.

"Tonight we got back to doing what we do well, being horrible to play against and showing desire.

"We know we're a good team and we owed the supporters, the manager and most of all ourselves a performance like that."

Speaking to ITV, he added: "We created a lot of chances and missed them, which was the story of our summer. But tonight, we were patient, kept making the chances and thankfully, we took them in the end.

"What we had been missing in the summer is what we showed at Wembley and here against Denmark - grit, desire, all the characteristics of a Scottish team that we kind of got away from.

"It was important that we had a reset. The manager made it clear it wasn't good enough in the summer.

"We were playing with a point to prove tonight. We had important players missing and we adapted well, changed formation and it was natural for us."

Dykes: I changed the game

"I was disappointed not to be playing, but I came on and changed the game.

"For Scotland, my goal record has been good and I'm going to keep on getting in the right positions and keep on scoring.

"It's a great start to this run of three matches. It will give us massive confidence and now we've got to keep it going against Ireland."

Please use Chrome browser for a more accessible video player 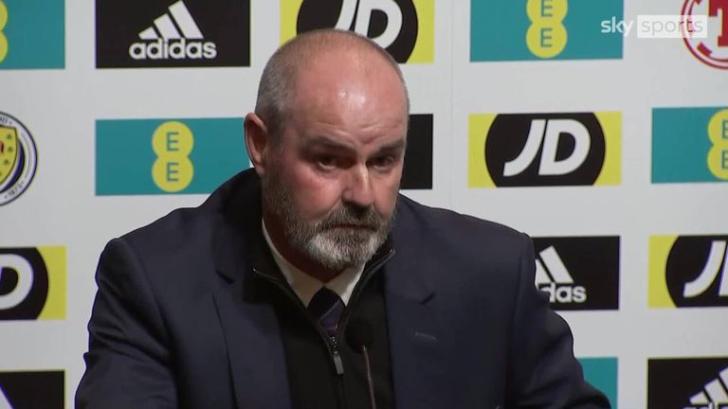 "The performance was really good, congratulations to the players.

"It was an open game, not many chances, then we got on top, and the first goal was always going to be crucial and thankfully we got that.

"It took us longer than we thought to get the goal, we missed a few chances and then John does what he does well. From there you can see there's a good belief and confidence.

"It was nice for two subs to come off the bench and make the scoreline better.

"When you're watching from the side, you know you're creating chances, you're waiting - actually expecting - one of them to go in because you're creating good chances. You trust the players to get the goal and that's what happened."

Scotland's next game is on Saturday as they face the Republic of Ireland at Hampden Park in a 7.45pm kick-off.

Steve Clarke's side then face Ukraine in an away fixture on Tuesday which will be played in Krakow, Poland due to Russia's ongoing invasion of Ukraine. The 7.45pm kick-off at the 15,000-capacity Marshal Jozef Pilsudski Stadium is Scotland's final Nations League game of their Group B1 campaign.