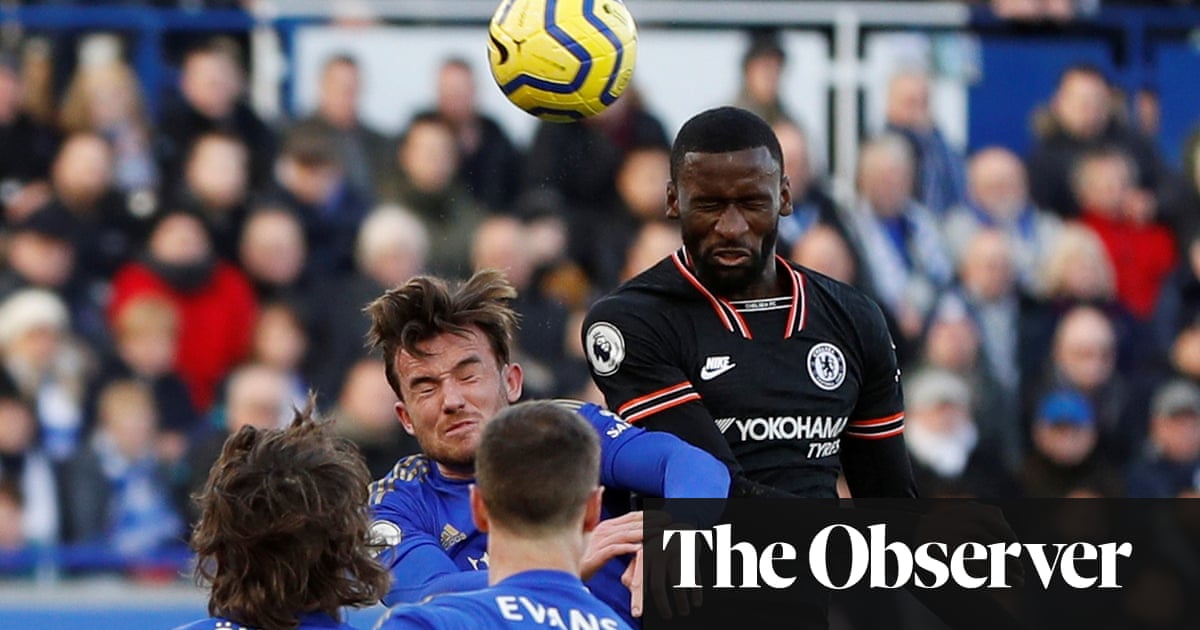 After Frank Lampard was left peeved by Chelsea’s failure to sign a striker in January, Antonio Rüdiger did his best to soothe the manager’s concerns, the centre-back marking his 100th appearance for Chelsea by heading in two goals. But that was not enough to close the gap on Leicester, who earned a share of the points thanks to goals by Harvey Barnes and Ben Chilwell. The result leaves them comfortable in third place, eight points about fourth-place Chelsea, who can feel the breath of the chasing pack on their backs.

Last season Chelsea finished third, 20 points above Leicester. But Leicester have improved since then and Chelsea have not. Lampard is more concerned about the progress made clubs just beneath him, suggesting the purchases made by Manchester United and Sheffield United make Chelsea underdogs in the fight for the last Champions League qualification spot even if Chelsea occupy it for now.

Lampard’s angst cannot have been eased by the profligacy of players other than Rüdiger here, especially in a first half when Chelsea’s lack of sharpness in front of goal prevented them from taking a lead they would have deserved. Several times teasing crosses were delivered into the home box – usually by Callum Hudson-Odoi or the excellent Reece James – but no attacker showed enough instinct and poise to get on the end of them.

Tammy Abraham was full of enthusiasm but was certainly not clinical after being declared fit enough to play despite the ankle knock he suffered in the draw with Arsenal two weeks ago.

One wondered what Olivier Giroud made of it all. The Frenchman, denied a January move away, was not even in the squad.

Lampard was more ruthless in his team selection than his forwards would prove on the pitch. He dropped Kepa Arrizabalaga to the bench, the manager apparently deciding he could no longer persist with the world’s most expensive goalkeeper. Instead, Willy Caballero made his first Premier League start since last May, when, as it happened, he kept a clean sheet in a goalless draw here.

The 38-year-old must have fancied his chances of keeping another clean sheet as Leicester made an uncharacteristically sluggish start. Their attempt to show that they were not deflated by their midweek Carabao Cup defeat at Aston Villa was not going well and, indeed, it suffered a setback even before kickoff, as the dynamic Wilfred Ndidi felt pain his knee and had to be replaced in the starting line-up by Hamza Choudhury.

For the first 25 minutes of a low-intensity fired period, Chelsea practically had the run of the place. César Azpilicueta made regularly bursts down the left, virtually unhindered by Ayoze Pérez. But when the left-back supplied an inviting centre in the fifth minute, Hudson-Odoi gave an indication of what was to come from Chelsea’s forwards in the first half by swishing at fresh air from the edge of the area.

Chelsea continued to get into dangerous positions with remarkably feeble resistance from Leicester, but the visitors’ final touch or pass was always a fraction off. But in the 20th minute Pedro slipped a perfect ball through to Abraham who chose not to open fire with his left foot and instead chopped back on to his right before going down under a challenge by Caglar Soyuncu. There was contact but not of a nature to justify a penalty, according to both the referee and VAR.

Leicester finally woke up in the 25th minute, jolted into action by sloppy play from Chelsea. Azpilicueta played a careless square pass that Pérez chested into the path of Jeremy Vardy. It was Caballero’s time to shine – the 38-year-old rushed off his line to block the shot from Vardy who went for power rather than precision.

The contest was more even for the remainder of the first half. Barnes lifted a shot badly over from 15 yards after neat work down the left by Chilwell, who had spent most of the game until that point trying to stop James from supplying forward at the other end.

Just before the break, Leicester came close to taking the lead, as James Maddison swung a corner to the back post and Choudhury leapt about N’Golo Kanté only to head just wide.

Perhaps that, or a half-time lecture from Lampard, inspired Chelsea. Because within 57 seconds of the restart, Rüdiger did what Choudhury had tried to do, taking advantage of hesitancy in the Leicester backline to head corner into the net at the back post. It was the German’s first goal for his club since October 2018.

If he hoped his teammates in attacking position had taken note of his emphatic finish, Rüdiger would soon be dismayed to realise that his goal inspired Leicester instead. The hosts struck back with two goals in 10 minutes.

Barnes scored the first after being released down the left by Youri Tielemans. The winger also enjoyed unwitting assistance from Andreas Christensen, who inadvertently deflected his shot over the wrongfooted Caballero and into the net.

Caballero, unfortunate on that occasion, was caught in the wrong place again in the 64th minute, this time after deciding to chase an overhit cross by Chilwell. The goalkeeper did an about turn but did not get back into position in time to stop Chilwell from swatting a low cross from Tielemans into the net.

Chelsea did not look like equalising until Rüdiger again took matters into his own hands. Or rather, the defender used his head again, soaring above Chilwell to meet a free-kick from the left by Mason Mount and power the ball into the net from 15 yards.

Jonny Evans had an ideal chance to emulate his centre-back counterpart in the 77th minute but nodded wide from six yards after being left free at a corner.

Three minutes later Barnes was presented with an even better opportunity by Vardy but side-footed a low shot wide from 10 yards.