The42
Share on FacebookShare Share on TwitterTweet
Last weekend’s humiliating 5-0 defeat has left Ole Gunnar Solskjaer in a tenuous position. 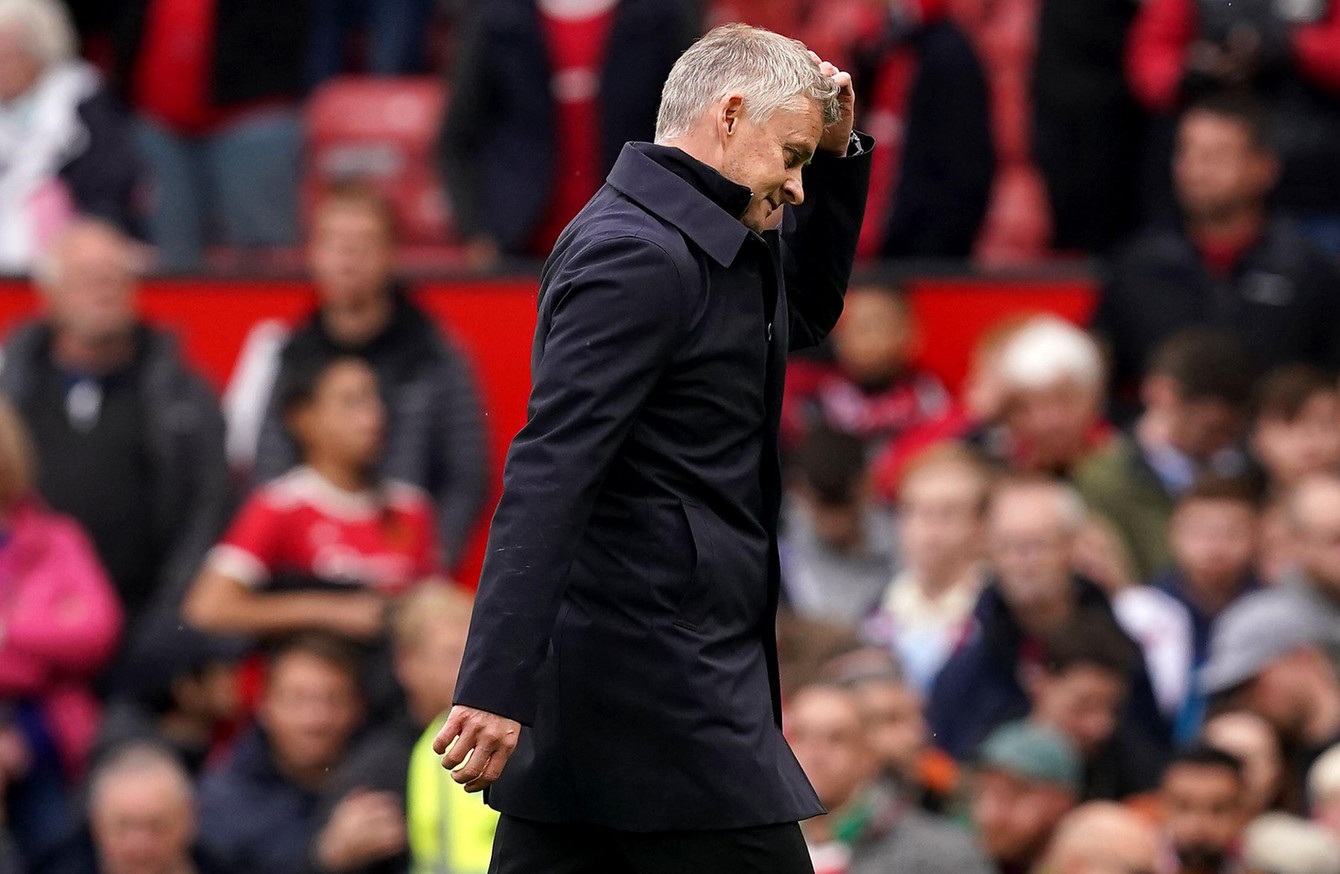 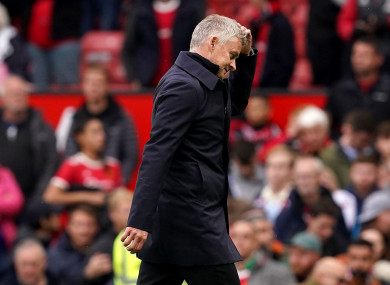 THE SEARCH for a scapegoat has been swift.

Whose fault is it that Man United were humiliated 5-0 at home by Liverpool? Ole Gunnar Solskjaer? Paul Pogba? Cristiano Ronaldo? Ed Woodward? The Saudi Arabian businessmen who bought Newcastle instead of them?

The answer is both none and all of those people.

It’s unfair to single out an individual at Old Trafford when the collective thinking there is so lamentable.

Man United now seem stuck in the past in the way the Liverpool were for much of the 1990s in the aftermath of a trophy-laden era.

The club’s unfortunate and somewhat farcical decline was summed up in microcosm recently.

It was an apparent criticism of Solskjaer who, for the first and so far only time in a Premier League match since he signed, initially opted to leave Cristiano Ronaldo on the bench during their 1-1 draw with Everton.

It was another reminder that the spectre of the Alex Ferguson era continues to loom over United in a big way, as was the Scottish legend’s visit to the training ground in the aftermath of the Liverpool hammering.

Ferguson is indisputably one of the greatest coaches the game has ever seen and the 79-year-old has transcended time perhaps more than any figure in the sport, given that he managed to stay at the helm and enjoy great success for most of his four decades with the Red Devils.

Yet there is a time when even the most iconic figures in football history’s ideas about the game grow stale and they get essentially left behind by modern trends.

If that infamous clip is anything to go by, Ferguson’s current thinking appears somewhat old school. ‘Football is a simple game and you pick the best players.’

If it is not working, buy better players. This philosophy invariably served the former manager well. The signings of the likes of Roy Keane, Eric Cantona, Andy Cole, Wayne Rooney, Cristiano Ronaldo right up to his final season with Robin van Persie all played a big part in taking United to a different level and spurred them on to some of their greatest successes.

You could argue they don’t really have the same pulling power now, but this strategy of simply purchasing the best players has not really changed since Ferguson left — if anything, it’s been amplified. All of Juan Mata, Angel Di Maria, Rademel Falcao, Zlatan Ibrahimovic, Paul Pogba, Alexis Sanchez, Romelu Lukaku, Harry Maguire, Cristiano Ronaldo and Raphael Varane were at the time of signing, and in some cases still are, among the best players in the world in their position and perceived as potentially having a transformative effect on the club.

And yet the trophy cabinet at Old Trafford has remained relatively paltry during the period in question.

So why has the ‘sign the best players’ policy failed when it worked quite well in the past?

What’s important to note is that football has changed irrevocably since Ferguson’s heyday.

As Simon Kuper recently pointed out in his excellent book ‘Barca,’ nowadays, most of the top teams play a version of the Cruyffian football that Pep Guardiola came close to perfecting with his great Barcelona side, whose finest hour was arguably just over a decade ago when they outclassed Ferguson’s United 3-1 in the 2011 Champions League final.

Systems have become increasingly important over the last 10 years, and individual talents are more expendable.

Even the most accomplished footballers — Mo Salah or Kevin De Bruyne — usually tend to be workhorses off the ball. Gifted individuals who don’t easily fit into a system often fade into irrelevance — Mesut Ozil is one relatively recent example.

Another instructive instance was evident when Jurgen Klopp arrived at Liverpool.

On the face of it, one of their best players at the time was Christian Benteke.

The Belgian international had arrived at Liverpool during the summer for £32.5 million, making him their second-most expensive signing ever at the time.

Klopp joined the club less than three months after Benteke.

There are obvious differences with the Ronaldo situation at United now, nonetheless, the new boss would have been under some pressure to regularly play such a big-money summer signing.

Yet Benteke started just seven Premier League games under the German coach and was sold a year after he signed for the club to Crystal Palace.

The striker was and remains a talented player, as the significant fee for his services suggests, but he simply did not suit Klopp’s style of play and so, was promptly discarded.

This force of personality, the sheer dogmatism and self-belief is part of what makes a great manager. You can also see it in the way Pep Guardiola ruthlessly cast aside club legend Joe Hart shortly after becoming Man City manager.

Get closer to the stories that matter with exclusive analysis, insight and debate in The42 Membership.

There is plenty of evidence to suggest Solskjaer does not have the same bloody-mindedness.

There were, however, indications to suggest the Norwegian until recently had been making a degree of progress.

He was trusting in youth and building a promising team that managed to finish second last season — five points ahead of Klopp’s Liverpool, albeit 12 points behind champions Man City.

Yet amid signs of light, United reverted to type. The signing of Cristiano Ronaldo — a reactionary move after the player was linked with City — undermined their philosophy.

They went back to the ‘sign the best players’ strategy at the expense of the system.

While a more powerful and influential coach might have been able to say ‘no,’ you get the sense that Ronaldo was foisted upon Solskajer, with the move cheered on by a cacophony of influential club legends.

Consequently, as a result of their failure to understand the trends of modern football, United now look as far away from its upper echelons as they have ever been in the post-Ferguson era.