Daily Mail
Share on FacebookShare Share on TwitterTweet
As Adele took to the Colosseum at Caesars Palace stage to begin her Las Vegas residency, the cheers were so deafening, you could almost, well, hear the sky fall.

By Lina Das At Caesars Palace For The Mail On Sunday

It was if the dramas of the preceding ten months had never happened. As Adele took to the stage of the Colosseum at Caesars Palace on Friday night to begin her Las Vegas residency at last, the cheers were so deafening that you could almost, well, hear the sky fall.

Clad in a stunning black gown, she may just as well have been wearing sackcloth and ashes, such was her contrition.

'I'm sorry for breaking your heart,' she sang with feeling, as she launched into her opening number, Hello. And as her fans screamed, she promptly dissolved into a puddle of tears. 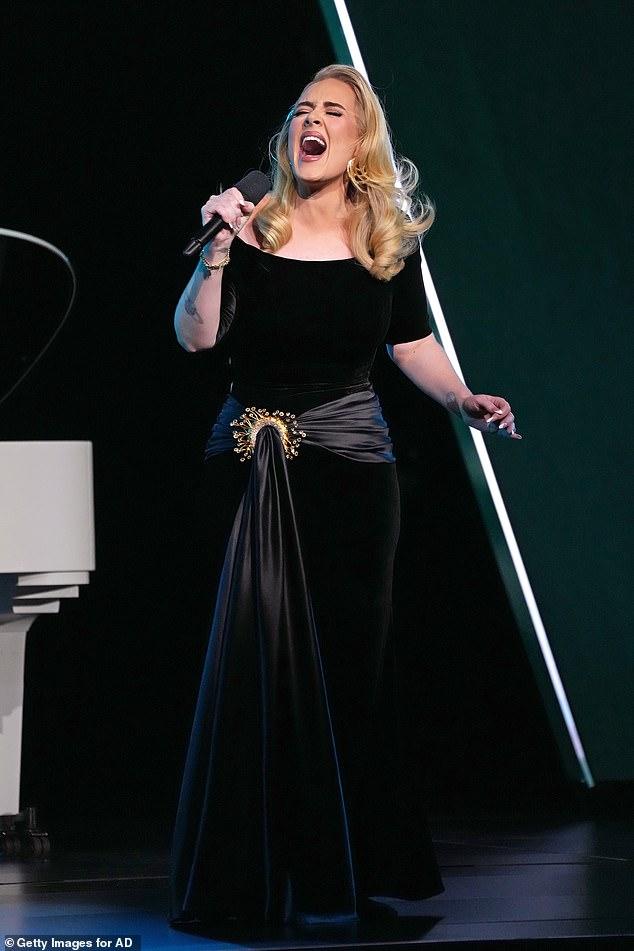 A-dele of a night! As Adele took to the stage of the Colosseum at Caesars Palace on Friday night to begin her Las Vegas residency at last, the cheers were so deafening that you could almost, well, hear the sky fall 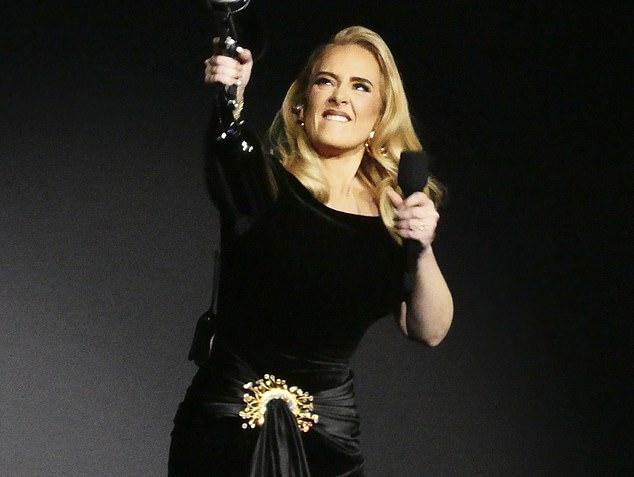 Someone like Adele: The crowd also sang along to her smash hit 'Someone Like You' , with the star also giving out T-shirts at the show 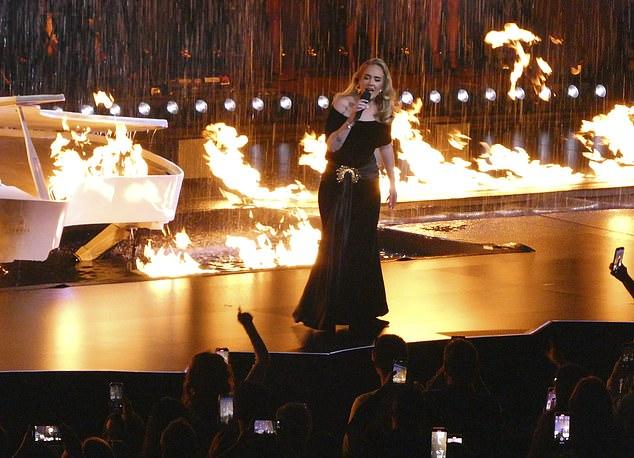 Wow! The grand piano on stage was literally on fire as she belted out her track Set Fire To The Rain 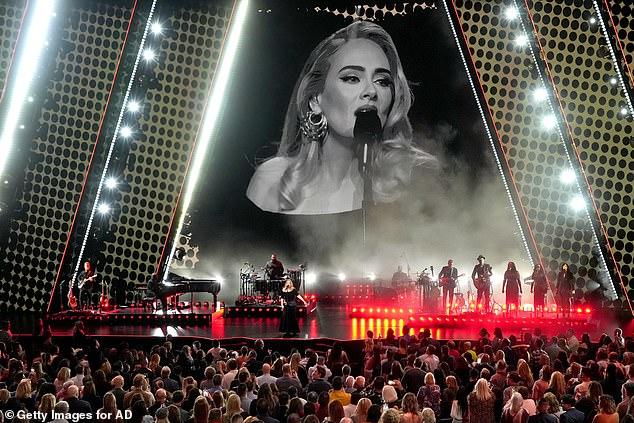 Beautiful! Clad in a stunning black gown, she may just as well have been wearing sackcloth and ashes, such was her contrition 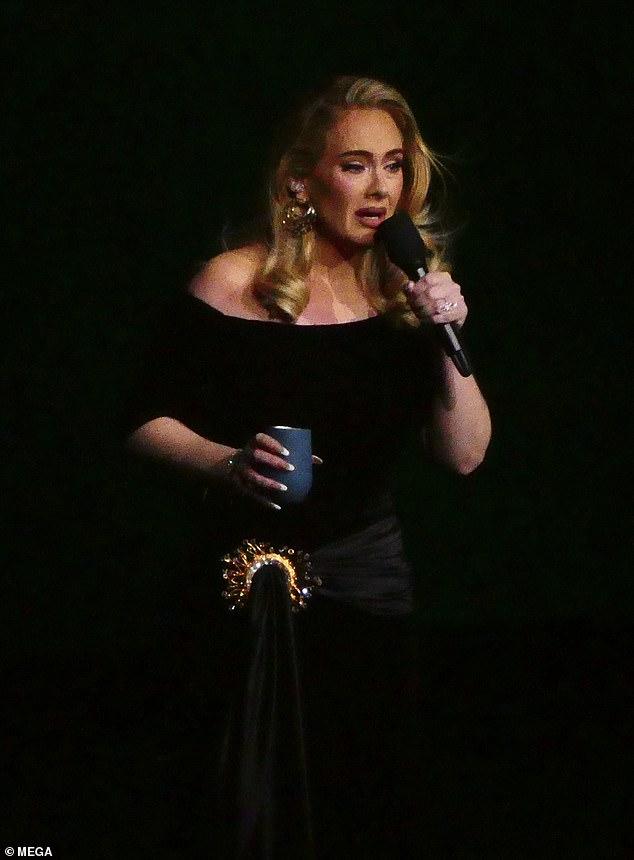 Tears: Adele was overcome with emotion and told of her nervousness as she took to the stage for the first of her long-awaited shows in Las Vegas 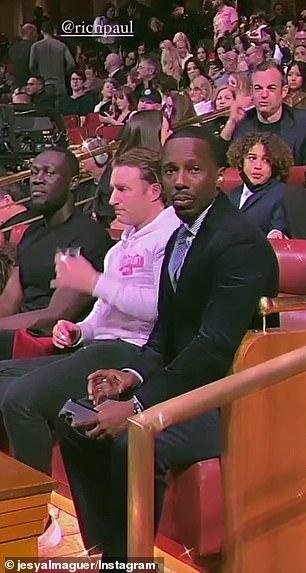 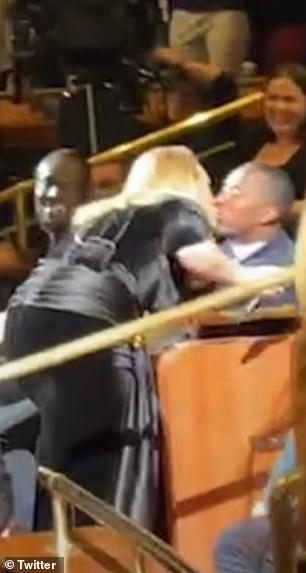 Support: The Someone Like You hitmaker, 34, also had the support of her boyfriend Rich Paul, 40, who looked dapper in a black suit as he sat in the audience and watched her perform, before the star later shared a kiss with her beau

It was the first of many emotional moments for the 34-year-old Londoner – and full marks go to her make-up artist who ensured that her flawless look did not budge during one of Adele's weepier moments.

'I should be giving you a standing ovation,' she told her fans. 'Thank you so much for coming back to me.'

The singer, who had tearfully cancelled her scheduled concerts at the last minute in January, managed to get through the two-hour, 20-song set for the near capacity 4,100 crowd with barely a glitch.

The spectacular show saw rainfall, a piano being set 'alight' on a bed of water and Adele firing T-shirts into the auditorium with a plastic gun.

While she previously put part of the blame on crew members suffering from Covid for postponing the original dates, reports later claimed she was unhappy with the extravagant scale of the production. 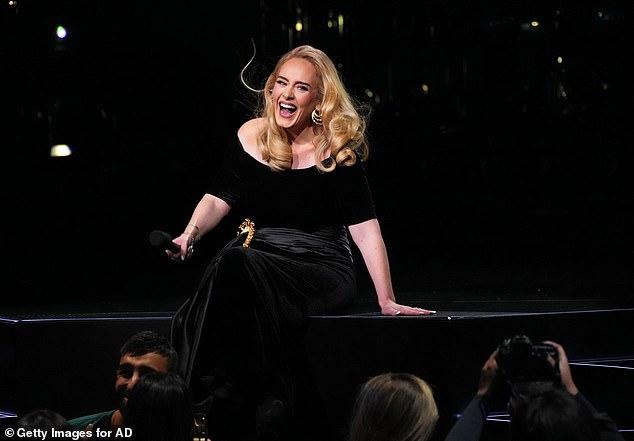 What a woman: Adele was on fine form as she finally took to the stage in Vegas for the first of her residency shows 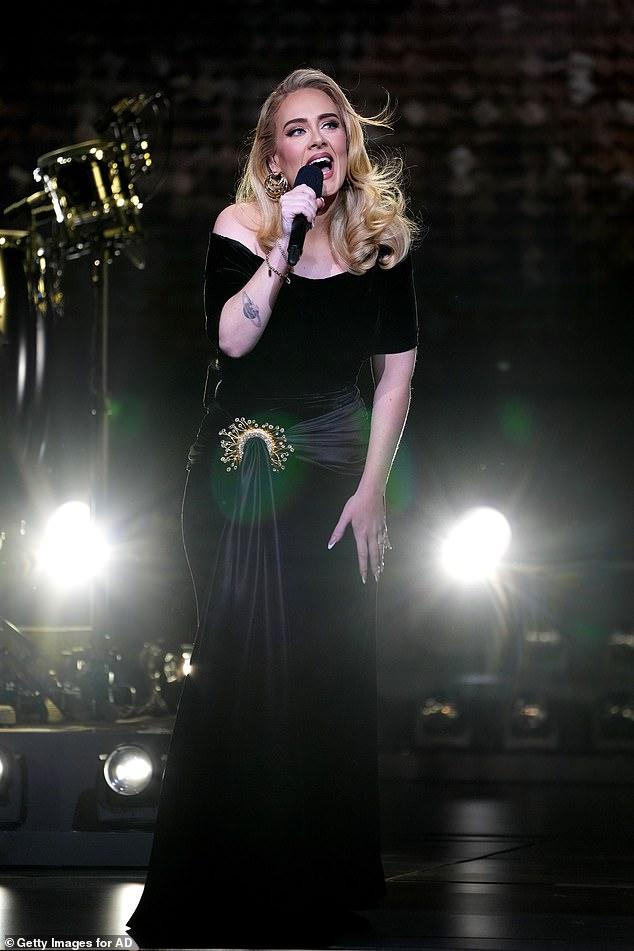 Gorgeous: Adele put on a very stylish display in her sleek black gown and gold accessories 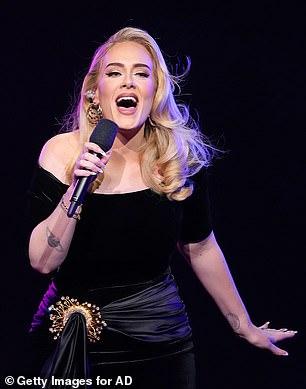 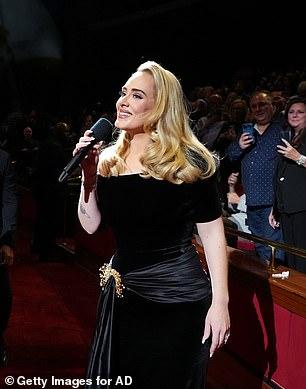 What a show: Adele looked in her element as she sang hit after hit on stage, because she made her way down to the audience to continue singing

She is understood to be earning about £800,000 a night for the 32-night run. Favourites including Chasing Pavements and Rolling In The Deep got an airing – but the loudest cheers came as the screens behind her lifted to reveal the 24-strong string section and she belted out Skyfall in true Bond-theme fashion.

Alicia Walker, 40, from Alaska, who said she lost about £1,500 on flights and hotels in January, said: 'Her music helped me out of my depression, so I feel indebted to her for getting me through tough times. And yes, after this, I forgive her.'

As the singer wrapped up her set, pretty much everyone in the audience had forgiven her too. Heart-shaped confetti rained down and, as she disappeared down a trapdoor in a hail of pink glitter, she signed off in typical fashion. 'I have no idea what I'm embarking on for five months,' she said, 'but I can't f***ing wait.'